We have not dwelt in this “neck of the woods” very long. However, when we first arrived, we learned of The Blue Mail Box. 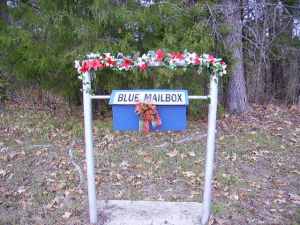 Yes, The Blue Mail Box is an actual place you can drive to, but it is also a place in history, a place in the hearts of many local people. You see, it stands for so much more than mail, although it does include mail. It stands for trust, cooperation, and grit. It stands for love-thy-neighbor. It stands for “. . . the howdy and the handshake, the laughter and the tears, the dream that’s been . . . ”

Yes. The Blue Mail Box is a has-been. It still exists, but the lovely things it represents exist only in history, only in hearts, only in memories.

I am sure the first time The Blue Mail Box was vandalized, it brought shock or pain to its extended family of devotees.

Now days, it enjoys protection–it’s been vandalized that much–as a memento of an innocent age we wish we could resume.

Who would try, these days, what was common occurrence back then?

Who would allow all the mail from one community to be deposited in one box with no lock, to be sorted through by anyone who lived there? Who would trust a neighbor to bring him his mail, since he was going that way, anyway? Who would kindly take old Widow Smith her mail, then open and read it for her?

No one in his right mind, that’s who. Not now days. But The Blue Mail Box was all that and more, once upon a time. Friends who chanced to meet at The Blue Mail Box would linger and visit. Surely a few surreptitious meetings between lovers occurred there, too, under the guise of “collecting Mama’s mail”? Probably notes, without postage, sometimes waited inside The Blue Mail Box, for folks who did not have phones to communicate with their neighbors.

But those days are over.

Half of it is illegal, these days, anyway.

Now days, when someone hears of The Blue Mail Box for the first time, they greet it with laughter, as I did. But as we grow to know these people, we realize the love that stood behind all that trust with each other’s mail. Elderly ladies smile as they tell of hi-jinks from school days. They boast of good preachers from back then.  They dream, starry-eyed, of past Christmas plays, spelling bees, weddings . . .

The Blue Mail Box is the stuff of real life, and we all should have something similar stuffed somewhere in the backs of our memories, for it once was the American way.

But we have allowed “them” to steal it from us and it is gone, isn’t it.

Except for the box.

We’ve thrown aside the gift and we’re playing with the box . . .

9 thoughts on “The Gift of the Blue Mail Box”