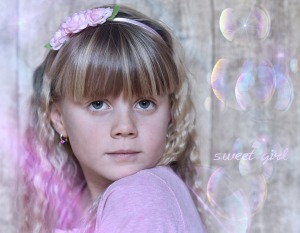 I watched her as she sashayed down the aisle between rows of dining tables. She had just come from church, no doubt, from the appearance and timing of her family’s entrance. She couldn’t have been over five years old.

But from head to toe, and not just the exterior but somehow even the aura emanating from her, all was advertisement.

Her hair, held in a side-saddle pony tail with a frou-frou clip composed of fuchsia feathers, probably was naturally palest blonde, but crease marks from a hasty curling iron had been sprayed to stay in place during the normal cavorting of a five-year-old. The ear on the un-pony-tailed side offered a pink, diamond-looking, pierced earring.

She did not cavort; she swayed in a dreamy sort of notice-me way. Even her tiny fingers posed. And she flirted fake embarrassment from behind the frou-frou near her cheek while fuchsia-manicured fingers clumsily retrieved an escaping shoulder strap. That’s when I noticed it: the batting eyelids carried a heavy load: blue eyeshadow and brown mascara, to top off pink blusher, and an overload of pink lip-gloss.

Her dress, also hottest of pinks, shimmered as it clung, draped closely to her thin child figure, revealing the bone of her structure, the ripple of her musculature, the absence of pantyline. Ebb and flow of glowing fabric blared unmistakably: temptress.

The dress was far too short, as was Mama’s, but at least Mama knew how to walk like a lady. And Mama didn’t shimmer.

Actually, Daughter’s included a wrap application of an attempt at an empire style skirt that was not full enough to allow room for walking, so each step she took opened the skirt and revealed one long, tanned, and muscular leg and hinted at much more. When one fuchsia-tipped toe pushed against silver, strippy, demi-heel sandals as she struggled her little self onto the adult dining chair, an older man across the dining room dropped his fork on the floor and picked it up.

And she noticed. And tried, not-enough, to conceal a knowing smile.

Rumpled and stale-haired, he approached their table and asked Dad if they didn’t know each other, occasionally glancing at Mama’s low-slung necklace. Dad searched his memory, clueless, finally blushing at not knowing, rose to shake hands and share a bit of social info. No, we live over in Dovegate Addition . . . don’t recall meeting you, but then, I stay gone on the road; field work, you know . . . the kids go to Dovegate schools so maybe we’ve passed during a PTA meeting? Oh . . . so sorry . . . I didn’t mean . . . well here’s our waitress; nice to meet you.

And as the older man turned to go, he patted Daughter’s shoulder ever so lightly, accidentally brushing a strap with one finger, saying, “Nice children.” And her shoulder straps really did fall down a lot whenever she was sitting . . .

Of course it would have been highly unlikely to have found a photo that was exactly like this true life situation, but this one captures the sauce pretty well.