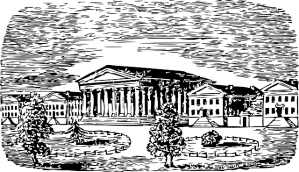 Just read a darling story about a guy who was, like me, a writer, but, who, not like me, had one published book under his belt and another on the way. He wrote of his old publisher doing something really unethical on the new book, and of having to insist it be recalled while he apologized to a certain famous person.

The famous person wrote him back with words of forgiveness.

His point was that it was wrong to have worried about this blunder, to have recalled the book, and to have written the apology.

While it is, truly, wrong to worry, it also is truly wrong to allow people to walk all over you and to let the mistakes you have allowed to damage others.

A Little Sweat Is Right and Good

The recall was right. The apology was right. The forgiveness was an act of mercy, which I do applaud, but the assessment of the whole ordeal was wrong.

I don’t know where this author went with the final outcome. I mean, did he use the same publisher, again? I don’t know. Did his relationship with the famous person grow and bloom or wither and die? I don’t know.

But I do know that, aside from the worry, he did the right thing.

And I might have worried a bit, too. Or at least prayed.

Which brings us to college debt forgiveness.

I am thinking I’ve lately read a wonderful solution to this lovely problem.

Folks may be thinking: what problem? There’s a problem? All these kids are getting out from under the huge burdens they were carrying from college. That’s a problem?

It’s a problem to any parent who watches a CORRECTLY brought up kid paying down debt, working and going hungry during their college years, in order to make a debt-free life for himself.

It’s a problem when a parent’s coffers are dwindling from having kids in college, while taxes go up to pay for other kids’ college debt and half of them are not even in college.

Yes, it’s too expensive. They knew that going in.

Yes, debt is a heavy burden. They needed to learn that before they got out.

Yes, I think forgiveness is primo.

You see, there will still be debt. Yep, it’s been passed around to us, who paid our own down, already. We’re all now in debt because today’s youth is stupid. YOU, dear reader, are in debt now, instead of them. Fine solution, I’d say.

Not about the High Cost?

The price of college is not going anywhere, and especially not going anywhere lower. If there is debt forgiveness legislated into our possibilities, then why lower the cost, hmm? Also, one huge factor many refuse to address in this equation is the fact that many families of high school grads did count the cost when they enrolled their children in a college, and then after they were locked in, the cost was raised. A contract was entered, a verbal agreement to a certain price, and then the rug was pulled. That can be so crippling.

Last, but not least, it’s not about forgiveness.

I’d love to help you pay your debts, really I would, but I think they’d rather I be in debt, myself instead. Sorry.

4 thoughts on “How to Sweat the Big Stuff”