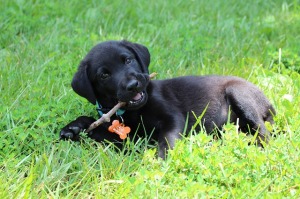 Long ago—oh, so long ago—we set out, trembling but sure, with little but our dear children and sheer determination, to home school.

Our children had endured unhappy experiences where they were, we had tired of the huge expense of a private education that produced unhappiness, and we imagined we could do at least as well as the teachers we had met.

Not much going for us? Well, we thought we had the world by the tail.

We did have it by the tail.

One of our first home-school acquisitions, a black Lab puppy, soon taught us some lessons about the joy of life. Before he grew out of the puppy stage, he had been, as the joke says, “like a Slinky—not really good for much, but it’s fun to watch him fall down.” As a Retriever, he totally loved retrieving, but never did really learn also to relinquish the retrieved thing. Still, if he brought the pop fly balls from wa-a-ay outfield, all slobbery, and we had to tussle them out of his mouth, it saved time and endless running for us and provided him no end of joy and exercise.

As our schedule solidified and we found more time for relaxation during schooling, we chose a particularly crisp, sunny day for a simple picnic. Just sandwiches, granola bars, and juice in sippy cups, each one making his own lunch, was all we wanted—that and a blanket outdoors. Because our year-old pup relished people food, we took along his dish, a bit of dog food, a dog biscuit, and some “fetch toys”. Loading all this into our wheelbarrow, we rolled out to the backside of our seven acres for a lazy hour of rejuvenation.

As we ate and tossed toys for our pup, we played silly games, joking and teasing a lot. Pup managed to steal half a sandwich from the youngest, which I replenished with half of mine. Oh, the laughter of that afternoon!

About a month later, we unearthed time for our second, ever, home-school picnic. Out came the same wheelbarrow, the same red blanket, the same toys, the same lunch bags….

Suddenly, from seemingly nowhere, our Lab appeared, running round and round the wheelbarrow, barking all the way. We laughed at him and his excitement. Could he be anticipating what our actions implied? Could he be excited about going on another picnic?

He scooped up his food dish in his teeth and ran a couple of circles around us, galloped off to the backside of the seven acres to deposit it, then rushed back barking all the way to hurry us along. That’s when we were certain of it: he actually remembered the fun of a month ago and seemingly could not wait for a replay.

Still laughing, more in wonder than amusement, we hurried as best we could while he continued barking.

What a marvel that a dog could understand family togetherness better than the world can!

The next hour filled with creating more happy memories.

But we guarded the sandwiches better.