For weeks, a wonderful guy in Ireland has been helping this Grandma with WordPress questions/problems. He is instant and constant and cheery and seems to LOVE helping. Makes life so nice.

He never made me feel dumb and never asked for a thing except a chance to help a bit more, if needed.

I checked out his site (shared with a brother) called Happy Guide, which is all about helping folks be happy.

Anyone would be happy to claim two such sons.

I haven’t read the whole thing, but I have read one page: “How to Overcome ME/CFS” and I was shocked and amazed.

It was so Biblical, and therefore, useful for me, I can only be glad–happy–to find it.

Hope you check them out.

A dear friend and blogging sis, Kate Kresse, has had the same idea I did.

Visiting last night via emails, we realized we were both planning the same post for today.

I mentioned a section of Scripture that encourages me in times such as ours, and she said she was posting on that very topic. So here we are.

Genesis 50:20-21 is one I use so often, I no longer have to research in order to find the reference. And with my memory, that’s a sure sign of much repetition. It goes:

“You intended to harm me, but God intended it for good to accomplish what is now being done, the saving of many lives. So then, don’t be afraid. I will provide for you and your children.” Although I feel attacked by the very leader I should admire and trust, although his stated aims are to make my life as hard as possible, although he cares not about right or wrong as long as he perceives he is “winning”, although I feel my life and livelihood are merely casualties in some gross political game, I am not to fear.

No fear. God will bring good from this in spite of the intentions of the one who seems to be in control of us.

Because that one is not really in control.

We will stand in awe and see amazing things, and my fear is slowly slinking away. . . . I left my children, one of whom was a teen (in the back seat) another, a baby (strapped into an infant car seat in the front) in the car while I stepped into a store to confirm an order.

Just for a moment.

The engine was off and in the parking gear. The town was population 100 or so, all friends and neighbors. The street was seldom trafficked.

This was a safe practice 30 years ago.

The baby was in that “twos” stage, when (we all know) it takes expert managing to control their little adventures. He was ready for adventure that morning.

We did not know he’d been studying how to extricate himself from his car seat.

The teenage child was in the midst of inexpertly admonishing him (from the back seat, remember) to get back into his seat, when the baby grabbed the gear stick and—in direct defiance of the manufacturer’s promises about parking safety specs—pulled it out of gear.

The car began to roll backward.

A grocery sacking attendant happened by at that moment.

And yanked open the door on which the baby was leaning for support.

The baby fell out.

The sacker guy grabbed him, about one second before the wheel could crush him, tossed him back into the car, jumped in, stomped on the brakes, and put the car back in gear, averting further disaster.

He then proceeded into the store where he chewed me out, half explaining and half blaming me, in his total anxiety/trauma/relief-reaction to his recent activities with my children.

I, wondering what he was talking about, left my business in the store to check on my children. All was seemingly fine. They were somewhat upset, but the baby had learned the lesson and was totally compliant about being in the seat, into which his older sib had succeeded in returning him.

Outside of anger that the car could be taken out of gear, when the engine was off and the keys in my purse, contrary to new safety regulations, with which the manufacturer made loud claims to have been in compliance, I really felt only relief and thankfulness for how things turned out.

An angel’s lips to kiss, we think,

We had a child who was very fond of Baby’s feet.

Once Baby was all bathed and dressed for bed, a secret and almost sacred ritual would begin.

First he would shyly ease his way into the dim-lit nursery and stand a bit away from the rocker where Baby rested in my arms. Then he would ask if Baby had bathed and if Baby’s feet were all clean.

Once assured, he then would ask if he might kiss Baby’s feet.

It always awed me, the tenderness this one had for Baby and for Baby’s feet.

And those were the nights that I learned all the baby expert books in the world that predict jealousy in the displaced sibling meant nothing to me.

And I never consulted them again.

What would your sitter do if a police officer forced entry without a warrant?

Officer Buccilli demanded to enter the home of Tim and LuAnn Batts, going so far as to stick his foot in the door and shove an 23-year-old sibling aside, threatening to arrest him and saying, “I don’t need no stinking warrant!”

When Joe stepped inside to call his policeman brother on his cell phone, Lt. Buccilli followed him. “Please don’t come in,” said Joe. “I am making a private call. You do not have permission to come in.”

Then it gets worse.

This is in the USA, friends. 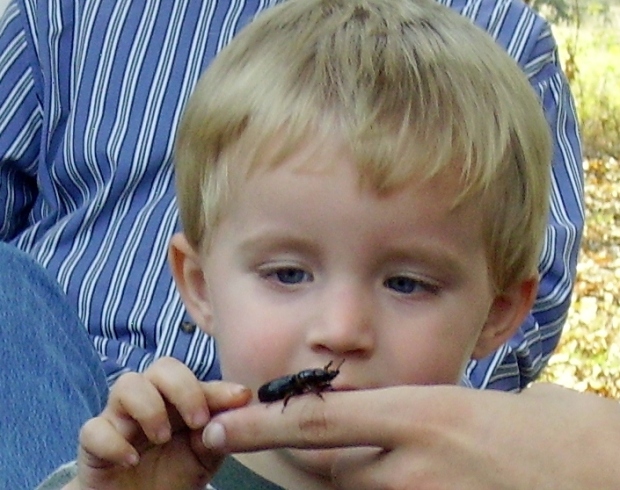 This young man is growing past his fear of bugs.

Surrounded by uncles while his daddy grills hamburgers, he is almost convinced this ferocious-looking creature will not harm him.

The uncle seated behind him in the blue stripes is a firm believer in fearlessness in young men.

The uncle proffering the insect loves this little guy and doesn’t mind setting the example.

Together, they provide a teaching moment for a daddy who would completely approve.

Thus immersed in family, we grow. Rembrandt. The Return of the Prodigal

. . . the father said to his servants,”Quick! Bring the best robe and put it on him. Put a ring on his finger and sandals on his feet. Bring the fatted calf and kill it. Let’s have a feast and celebrate. For this son of mine was dead and is alive again; he was lost and is found. So they began to celebrate.  –Luke 15:22-24